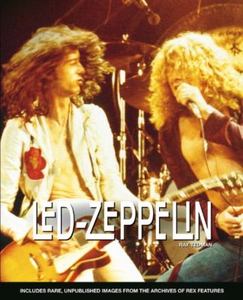 The most important thing in this big book of photographs is, of course, Robert Plant’s hair, which often looks remarkably like mine in both its colour and its curliness. There’s also little to choose between me and Robert Plant in the sex-god stakes, so I’ve often wondered precisely whose gigs my mother was attending in her youth (related rumours circulate, muso mutato et mama mutata, about at least one other keyly committed core component of the counter-cultural community). These aren’t unusual thoughts for me when I look at a book about Led Zeppelin: their hair interests me more than their harmonics. I usually get bored well before songs like “Whole Lotta Love” and “Stairway to Heaven” are over and I would much rather listen to the Beatles or Black Sabbath, even at their worst, than to Led Zeppelin, even at their best.

But, at their best, before their locks were shorn as the 1970s ended, Led Zeppelin did look much more like rock-gods than either the Beatles or Black Sabbath. One thing all three bands have in common is their classic quadrivalency: there are four men in each filling the four standard rock roles. I’ve outlined my humorous theory of the classic guitar-bass-drums-vocals line-up elsewhere, so all I’ll say here is that Led Zeppelin fit the theory well. Each member has a distinct personality as he plays a distinct instrument. Each is also distinct in appearance: Jimmy Page is rake-thin, Robert Plant well-built, John Paul Jones average, and Bonzo stocky. Bonzo always had facial hair too, which must say something about his psychology. The colour of his hair certainly says something about his psychology. Like skin-colour and eye-colour, hair-colour is a chemical phenomenon: different colours signal different chemicals or different levels of chemical in the body, and so in the brain. Lighter hair, like lighter skin and eyes, tends to go with a more introverted, less aggressive personality and it may be significant that Robert Plant and John Paul Jones, with lighter hair, are said to have been the two best-behaved members of Led Zeppelin. Black-haired Bonzo was notoriously bestial and also the heaviest drinker. Jimmy Page wasn’t violent, despite having black hair, but his somatype, or body-shape, doesn’t predict violence.

His face may predict high intelligence and high artistic achievement, however: he has always been a good-looking man. Good looks are related to symmetry, and symmetry is related to intelligence and coordination. Again, this isn’t an absolute rule: good-looking people can be stupid and bad at music, just as ugly people can be intelligent and good at music, and strange things can sometimes happen at the extremes of the bell-curve. But biology is about averages and tendencies, not absolutes, and biology is central to understanding human beings and their behaviour. That’s one of the things I find interesting about looking through this book, but there’s much more than individual biology at work here. Led Zeppelin followed fashions as well as setting them and faithfully reflected the look of the three decades in which they existed: the ’60s, the ’70s, and the ’80s.

Or first year of the ’80s, anyway: Bonzo died on 25th September 1980 and the band broke up. The book then follows Plant and Page into their solo careers and their occasional re-unions with Jones, but nobody looks as good as he did in the band’s mid-’70s prime, when their locks were longest and their testosterone levels highest. Endocrinology, or the science of hormones, is another essential part of understanding human behaviour and rock music at its loudest may influence hormones with more than its rhythms and melodies. High volume affects the entire body, not just the ears, and Led Zep were loud and proud, a band who shook the glands of their fans in more ways than one. As I’ve said, I’m not a big fan of Led Zeppelin myself, but if you are I can recommend this book. The photos range from the casual to the candid, the rampant to the risible, the phallocratic to the fan-worshipped, and there are regular biographical pages to guide you through the Led Zeppelin story. Oh, and there’s an index too, which books like this often lack.

I’ve seen too many bad bios about big beasts of the rock jungle to expect much when I pick up a new one, but I was pleasantly surprised by Light and Shade. It does descend into rock-journalese from time to time – Cream and Jimi Hendrix adopted “a new, heavily riff-driven mode of expression” in 1967, apparently – but the conversations with Page are interesting, intelligent, and even impish, as when Page reveals he can mock himself:

On your 1973 tour you started using your own private plane, the Starship. Was that a good thing, or did it just guarantee that the party could continue and you’d never have a moment of rest?

No, it was a good thing. It was a place where you could bring your music and books and create some semblance of continuity as you travelled from city to city. However, [our former tour manager] Richard Cole ran into one of the air hostesses on the Starship recently and she told him, “You know we made a lot of money off you guys,” and Cole asked her how. “Well,” she explained, “when people on the plane used to sniff cocaine, they’d roll up hundred-dollar bills to use as straws. Then after they were high or passed out, they’d forget about the money. So we would go around and grab all the money that was laying around.” That might’ve been true, but I’ll tell you one thing: They never got any of my money! [laughs]

And now you know, if you didn’t already, why Page has the nickname “Led Wallet”: he has always been canny with his cash. But don’t be misled by the coke reference or the chapter-title: this isn’t Hammer of the Gods, the most notorious of the Zeppographies, so the sex’n’drugs side of Page’s rock’n’roll story doesn’t get anywhere near as much attention as his music, his metaphysics, and his mutating fashions. There aren’t many photos, but they’re all well-chosen and you can trace the evolution of Page’s looks, locks, and collaborations right from the 1960s to the present day. There are also contributions from John Paul Jones, Jack White of the White Stripes, publicists, guitar experts and fashionistas, so you do get a well-rounded portrait of an interesting and highly influential musician. I’m not a big Led Zeppelin fan and I still liked this book. And regretted the absence of an index. So it’s a shade light there. Otherwise, it should provide many pages of pleasure for Page-o-philes.

2 thoughts on “Get Your Locks Off”