The porker is Bill Bunter, the fat, lazy and greedy public schoolboy whose misadventures at Greyfriars School were chronicled, under the pseudonym Frank Richards, by the highly prolific Charles Hamilton (1876-1961). One of Bunter’s schoolfellows was the languid and apparently effete peer Lord Mauleverer, who contributed this poem to The Greyfriars Holiday Annual for 1928:

“The Song of the Slacker”, by Lord Mauleverer

Tell me not, in mournful numbers,
Life was meant for toil and hustle;
It was meant for soothing slumbers,
Which relax both mind and muscle.

Life is lovely! Life is topping!
When you lie beneath the shade,
With the ginger-beer corks popping,
And a glorious spread arrayed.

Not enjoyment, and not sorrow,
Is our destined end or way;
But to put off till to-morrow
Work that should be done today!

In the world’s broad field of battle
All wise soldiers take their ease;
And they lie asleep, like cattle,
Underneath the shady trees.

Trust no Future, trust no Present,
Let the dead Past bury its dead!
The only prospect nice and pleasant
Is that of “forty winks” in bed!

“Life is short!” the bards are bawling,
Let’s enjoy it while we may;
On our study sofas sprawling,
Sleeping sixteen hours a day!

Lives of slackers all remind us
We should also rest our limbs;
And, departing, leave behind us,
“Helpful Hints for Tired Tims!”

Helpful hints, at which another
Will, perhaps, just take a peep;
Some exhausted, born-tired brother––
They will send him off to sleep!

While the hustlers are pursuing
Outdoor sports, on land and lake;
Let us, then, be up and doing––
There are several beds to make. – The Greyfriars Holiday Annual for 1928 (1927), Howard Baker abridged edition 1971

I liked the poem when I first read it, but I didn’t spot the parody as soon as I should. It was unexpected, you see, but then it dawned on me that “The Song of the Slacker” must be a parody of a famous poem by the poof-poet A.E. Housman (1859-1936):

Wake: the silver dusk returning
Up the beach of darkness brims,
And the ship of sunrise burning
Strands upon the eastern rims.

Wake: the vaulted shadow shatters,
Trampled to the floor it spanned,
And the tent of night in tatters
Straws the sky-pavilioned land.

Up, lad, up, ’tis late for lying;
Hear the drums of morning play;
Hark, the empty highways crying
“Who’ll beyond the hills away?”

Towns and countries woo together,
Forelands beacon, belfries call;
Never lad that trod on leather
Lived to feast his heart with all.

Up, lad: thews that lie and cumber
Sunlit pallets never thrive;
Morns abed and daylight slumber
Were not meant for man alive.

Clay lies still, but blood’s a rover;
Breath’s a ware that will not keep.
Up, lad: when the journey’s over
There’ll be time enough to sleep. – A Shropshire Lad (1896), Poem IV

The meter of the two poems is the same, the period is right, and the sentiments of Housman’s call to energy and effort are turned neatly on their heads in Lord Mauleverer’s call to sleep and slackness. And it’s a clever parody, although it’s a little too long. I’m glad to have come across “The Song of the Slacker”, which the second-best parody of Housman I’ve read. Here’s the best:

What, still alive at twenty-two,
A clean, upstanding chap like you?
Sure, if your throat ’tis hard to slit,
Slit your girl’s, and swing for it.

Like enough, you won’t be glad,
When they come to hang you, lad:
But bacon’s not the only thing
That’s cured by hanging from a string.

So, when the spilt ink of the night
Spreads o’er the blotting-pad of light,
Lads whose job is still to do
Shall whet their knives, and think of you.

When the sands are all dry, he is gay as a lark,
And will talk in contemptuous tones of the Shark:
But, when the tide rises and Sharks are around,
His voice has a timid & tremulous sound. — Lewis Carroll, Alice in Wonderland (1865)

Album primo-avrilesque, meaning April-Foolish Album, is a collection of visual jokes published by the French humourist Alphonse Allais (1854-1905) on 1st April 1897. Note that some of the captions can’t be translated fully into English, because they use French idioms that refer to color. 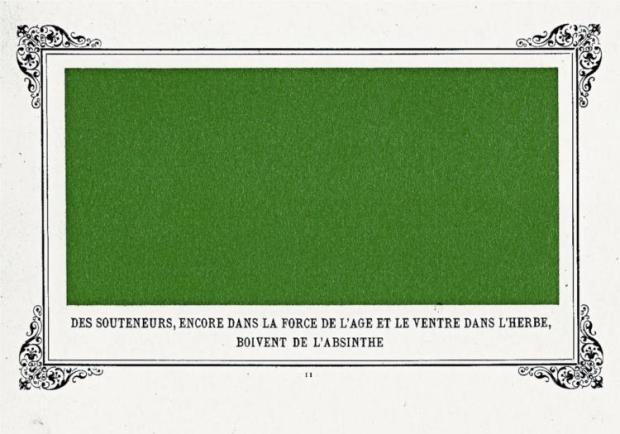 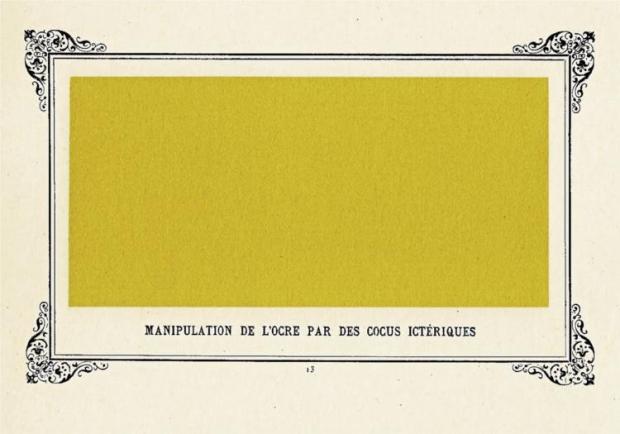 Manipulation de l’ocre par des cocus ictériques
Handling of ochre by jaundiced cuckolds
(According to one page I’ve found, coucou is the name given to some yellow wild-flowers, and cuckolds can be yellow with jealousy)

Ronde de pochards dans le brouillard
Dance of drunks in the fog
(Slang for “drunk” in French is gris, which also means “gray”)

DIVERSIONS OF THE RE-ECHO CLUB

It is with pleasure that we announce our ability to offer to the public the papers of the Re-Echo Club. This club, somewhat after the order of the Echo Club, late of Boston, takes pleasure in trying to better what is done. On the occasion of the meeting of which the following gems of poesy are the result, the several members of the club engaged to write up the well-known tradition of the Purple Cow in more elaborate form than the quatrain made famous by Mr. Gelett Burgess:

“I NEVER saw a Purple Cow,
I never hope to see one;
But I can tell you, anyhow,
I’d rather see than be one.”

Oh, Cow of rare rapturous vision,
Oh, purple, impalpable Cow,
Do you browse in a Dream Field Elysian,
Are you purpling pleasantly now?
By the side of wan waves do you languish?
Or in the lithe lush of the grove?
While vainly I search in my anguish,
Bovine of mauve!

Despair in my bosom is sighing,
Hope’s star has sunk sadly to rest;
Though cows of rare sorts I am buying,
Not one breathes a balm to my breast.
Oh, rapturous rose-crowned occasion
When I such a glory might see!
But a cow of a purple persuasion
I never would be.

• The Purple Cow Parodies
• Diversions of the Re-Echo Club
• Such Nonsense! An Anthology (c. 1918) — with this and other parodies

As the sin that was sweet in the sinning
Is foul in the ending thereof,
As the heat of the summer’s beginning
Is past in the winter of love:
O purity, painful and pleading!
O coldness, ineffably gray!
Oh, hear us, our handmaid unheeding,
And take it away!

Strange pie that is almost a passion,
O passion immoral for pie!
Unknown are the ways that they fashion,
Unknown and unseen of the eye.

What, still alive at twenty-two,
A clean, upstanding chap like you?
Sure, if your throat ’tis hard to slit,
Slit your girl’s, and swing for it.

Like enough, you won’t be glad,
When they come to hang you, lad:
But bacon’s not the only thing
That’s cured by hanging from a string.

So, when the spilt ink of the night
Spreads o’er the blotting-pad of light,
Lads whose job is still to do
Shall whet their knives, and think of you.