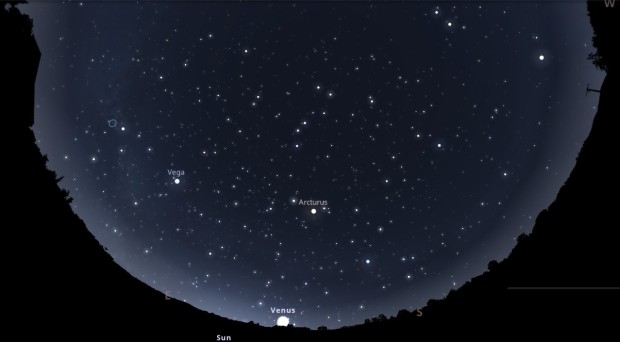 The toxic title of this incendiary intervention is supposed to be understood such that the verb “Lucíferizing” (acting like Lucifer, turning into Lucifer, etc) has an echo of “Lúcifer Rising”. Lucifer, or “Light-Bearer”, is also a name for the planet Venus, which is rising in the image of the foredawn sky.

• “Planet is the cradle of mind, but one cannot live in the cradle forever.” — Konstantin Tsiolkovsky

“He that will not set himself proudly at the top of all things; but will consider the Immensity of this Fabrick, and the great variety, that is to be found in this little and inconsiderable part of it, which he has to do with, may be apt to think, that in other Mansions of it, there may be other, and different intelligent Beings, of whose Faculties, he has as little Knowledge or Apprehension, as a worm shut up in one drawer of a Cabinet, hath of the Senses or Understanding of a Man.” — John Locke, An Essay Concerning Human Understanding (1689), viâ David Wootton’s The Invention of Science (2015)

The title of this incendiary intervention is intended to suggest the idea of Locke’s ideas acting as a rocket-fuel for the imagination like LOX or lox, meaning “liquid oxygen explosive; later interpreted as representing liquid oxygen” (OED).

• Stop the Brott – staying the serial slaying of a sanguinivorous psychoanalyst

• Or Read a Review at Random: RaRaR

• Canine the Barbarian – The Call of the Wild, White Fang, and Other Stories, Jack London (Penguin American Library 1981)

• An Island of Her Own – The Phantom Atlas: The Greatest Myths, Lies and Blunders on Maps, Edward Brooke-Hitching (Simon & Schuster 2016)

• “The sun, with all those planets turning around it and dependent on it, can still ripen a bunch of grapes as if it had nothing else in the universe to do.”

• Sextual Keeling – Sextant: A Voyage Guided by the Stars and the Men Who Mapped the World’s Oceans, David Barrie (William Collins 2014)