Pre-previously on Overlord-in-terms-of-the-Über-Feral, I’ve looked at intensively interrogated issues around the L-triomino, a shape created from three squares that can be divided into four copies of itself:

An L-triomino divided into four copies of itself

I’ve also interrogated issues around a shape that yields a bat-like fractal:

A fractal full of bats

Now, to end the year in spectacular fashion, I want to combine the two concepts pre-previously interrogated on Overlord-in-terms-of-the-Über-Feral (i.e., L-triominoes and bats). The L-triomino can also be divided into nine copies of itself:

An L-triomino divided into nine copies of itself

If three of these copies are discarded and each of the remaining six sub-copies is sub-sub-divided again and again, this is what happens:

…that is also a rep-9 rep-tile

Five of the sub-copies serve as the seed for an interesting fractal:

This is a different kind of rep-tile:

But it yields the same fractal cross:

Abstract: The game of chess is the most widely-studied domain in the history of artificial intelligence. The strongest programs are based on a combination of sophisticated search techniques, domain-specific adaptations, and handcrafted evaluation functions that have been refined by human experts over several decades. In contrast, the AlphaGo Zero program recently achieved superhuman performance in the game of Go, by tabula rasa reinforcement learning from games of self-play. In this paper, we generalise this approach into a single AlphaZero algorithm that can achieve, tabula rasa, superhuman performance in many challenging domains. Starting from random play, and given no domain knowledge except the game rules, AlphaZero achieved within 24 hours a superhuman level of play in the games of chess and shogi (Japanese chess) as well as Go, and convincingly defeated a world-champion program in each case. — “Mastering Chess and Shogi by Self-Play with a General Reinforcement Learning Algorithm”, 5/XII/2017. 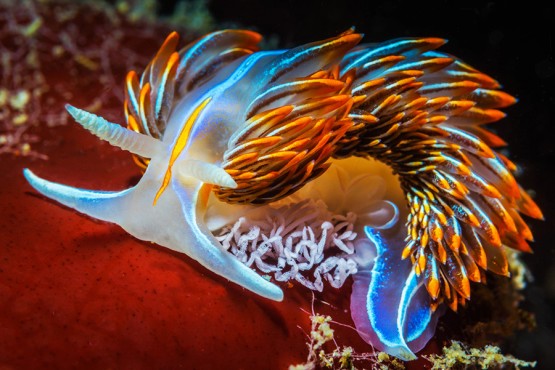 • Silently, subtly, the rust-red sand trickled through the narrow glass aperture, dwindling away out of the upper vessel, in which a little whirling vortex had formed. — “Death in Venice” (translated by David Luke)