“I once received a letter from an eminent logician, Mrs. Christine Ladd-Franklin, saying that she was a solipsist, and was surprised that there were no others.” — Bertrand Russell, Human Knowledge: Its Scope and Limits (1948)

The title of this post is, of course, a radical reference to core Jethro Tull album Aladdin Sane (1973).

Mathematics, rightly viewed, possesses not only truth, but supreme beauty — a beauty cold and austere, like that of sculpture, without appeal to any part of our weaker nature, without the gorgeous trappings of painting or music, yet sublimely pure, and capable of a stern perfection such as only the greatest art can show. The true spirit of delight, the exaltation, the sense of being more than man, which is the touchstone of the highest excellence, is to be found in mathematics as surely as in poetry. What is best in mathematics deserves not merely to be learnt as a task, but to be assimilated as a part of daily thought, and brought again and again before the mind with ever-renewed encouragement. Real life is, to most men, a long second-best, a perpetual compromise between the ideal and the possible; but the world of pure reason knows no compromise, no practical limitations, no barrier to the creative activity embodying in splendid edifices the passionate aspiration after the perfect from which all great work springs. Remote from human passions, remote even from the pitiful facts of nature, the generations have gradually created an ordered cosmos, where pure thought can dwell as in its natural home, and where one, at least, of our nobler impulses can escape from the dreary exile of the actual world. — Bertrand Russell, “The Study Of Mathematics” (1902)

The title of this incendiary intervention is of course a paronomasia on these lines from Led Zeppelin’s magisterial “Stairway to Heaven”:

“If there’s a bustle in your hedgerow, don’t be alarmed now:
It’s just a spring-clean for the May Queen…”

And “head-roe” is a kenning for “brain”.

Nietzscheans are a lot like Christians, just as Nietzsche was a lot like Christ. They’re often very bad adverts for their master, and their master would have been horrified to see some of his followers. Or perhaps not: Nietzsche believed in amor fati, or acceptance of fate, after all. He also thought that the omelette of the Übermensch wouldn’t be made without breaking a lot of human eggs. But I’m sure amusement, rather than horror, would have been his reaction to Bertrand Russell’s very hostile chapter about him in A History of Western Philosophy (1945). Russell wasn’t everything Nietzsche despised – I’m not sure a single human being could combine everything Nietzsche despised – but he came pretty close. He was liberal, humanitarian, altruistic, philanthropic, philogynist, and English (kind of). If Russell had liked Nietzsche, Nietzsche would surely have whirled in his grave. But Russell didn’t, and certainly not from the perspective of the Second World War, when he wrote A History of Western Philosophy and Nietzsche still seemed heavily implicated in Nazism.

He wasn’t, of course: the naughty and nasty Nazis misinterpreted him very badly. But he’s much easier for Nazis to misinterpret than Marx is, as proved by the respective status of these two philosophers in Nazi Germany and the Soviet Union. Russell doesn’t so much misinterpret him as mutilate and muffle him. I would have thought that anyone, Nietzschophile or not, would acknowledge the intellectual power and range of Nietzsche’s writing. I have never felt so strongly in the presence of genius as when I first read one of his books. In Wagnerian terms, he combines Wotan with Donner, infusing the subtlety and cunning of Odin into the strength and energy of Thor. I can’t read him in German and he himself said he’d have preferred to write in French. But enough of his power comes across in English even for Russell, I’d’ve thought. Not so, and not so for many other Anglophone readers, who dismiss Nietzsche as meaningless and trivial. You might as well call the sun dull and thunder quiet: Nietzsche blazes and bellows with meaning. He also, unlike many of his followers, has a sense of humour. Russell did too, but his polemic refuses to acknowledge Nietzsche’s jokes and playfulness:

His general outlook remained very similar to that of Wagner in the Ring; Nietzsche’s superman is very like Siegfried, except that he knows Greek. This may seem odd, but that is not my fault. In spite of Nietzsche’s criticism of the romantics, his outlook owes much to them; it is that of aristocratic anarchism, like Byron’s, and one is not surprised to find him admiring Byron. He attempts to combine two sets of values which are not easily harmonized: on the one hand he likes ruthlessness, war, and aristocratic pride; on the other hand, he loves philosophy and literature and the arts, especially music. Historically, these values coexisted in the Renaissance; Pope Julius II, fighting for Bologna and employing Michelangelo, might be taken as the sort of man whom Nietzsche would wish to see in control of governments. (Op. cit.)

Yes, but he justifies his likes, loves, and loathings in some of the most original, exhilarating, and interesting books ever written. Perhaps the problem was the one diagnosed by Lytton Strachey in Eminent Victorians (1918) when he discussed the antagonism between Newman and Charles Kingsley: “The controversy was not a very fruitful one, chiefly because Kingsley could no more understand the nature of Newman’s intelligence than a subaltern in a line regiment can understand a Brahmin of Benares.” Russell was the subaltern, Nietzsche the Brahmin. If Russell was clever, Nietzsche was cleverer. If Russell had read widely, Nietzsche had read wider. Russell was undoubtedly better at maths, but there have been lots of good mathematicians. Nietzsche could have echoed what Beethoven is supposed to have said to an aristocrat who offended him: “There are and will be a thousand princes; there is only one Beethoven.” Without Russell, I don’t think the world would be a very different place: other people would have thought and written pretty much what he did. It’s difficult to say how different the world would be without Nietzsche, but one thing is certain: it would be less interesting and contain less iconoclasm. Nietzsche thought and wrote things no-one else would have or could have. As a philosopher, Russell was a competent but replaceable journalist, Nietzsche a brilliant and irreplaceable poet. He appeals to writers and artists partly because he confirms their self-importance, but the confirmation hasn’t always been wrong. I think a Deus ex Machina is likelier than the Übermensch, but either way mankind will be surpassed and Nietzsche was the one to prophesy it, not Russell. Born earlier, living shorter, he saw further, wrote better, and will be remembered longer. His moustache was bigger too. Russell was wrong to whip poor Wilhelm, but Wilhelm wouldn’t have wanted it any other way. 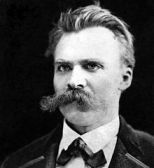