I have a natural history book that has a photograph of a mole as it emerges from a patch of bare soil, digging itself up with its forepaws. But the photograph has been posed: the mole’s obviously dead. Its colour is wrong and you can see that there’s no tension in its body.

But the photograph might fool a hasty glance. The difference between tense life and flaccid death is small and there’s no clue in the mole’s eyes, because you can’t see them. It’s a mole, after all. In this photo, on the other hand, you can’t miss the eyes:

But an insect’s eyes don’t generally change when it dies, so the wasp’s eyes don’t refute or confirm a suspicion I have about the photo: that it’s also posed with a dead subject. I’m much less certain than I am about the mole, but then a dead insect is harder to read than a dead mammal. Insects have chitinous exoskeletons, not skin or fur over muscles, so their bodies don’t obviously lose tonus when they’re dead.

But something about the posture of the wasp looks wrong to me. So do its antennae: trailing on the ground, not held up. I’m far less certain than I am about the mole, but I’m suspicious. And I’m interested in my suspicion. Photographs are usually harder to read than moving pictures. There’s less information in them, because they record an object in an instant of time. You might say that you have to go by the geometry, not the trajectory.

Or lack of it. Dead things don’t have trajectories, unless an external force imposes one on them. So it’s the geometry – slumped limbs, slightly twisted heads – that betrays the true status of some of the subjects in the book Living Jewels, which collects photographs of tropical beetles. They’re museum specimens and some may have been dead for years or decades. Exoskeletons don’t corrupt and decay like skin and muscle, so the beetles retain their beauty.

And they don’t look blatantly dead. Not the way mammals would. There’s less information in an insect’s exoskeleton, so the difference between life and death is harder to read. Emotions are harder to read in an insect too. What would a photo of an angry beetle look like? Insects’ faces are immobile, like masks, which is one reason they seem so eerie and alien.

People are different: there’s lots of information in our faces and postures, let alone our voices. And sometimes imposture (and im-posture) is easy to read. We’re all familiar with false smiles and fake laughs. For me, it gets interesting when information is restricted and you can’t see someone’s face. How much can you tell from the back of a head, for example? Or a hand? Sometimes a lot. That’s why I’m interested in these photos of people adopting a stereotyped attitude of despair: slumped and heads-in-hands: 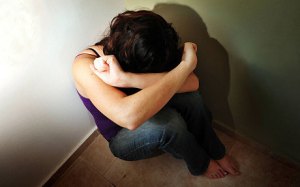 I don’t think any of the photos are of genuine emotion: they’re too clean and carefully lit, for one thing. And you wouldn’t expect them to be real. But the difference between posed despair and the real thing is often very slight. There are subtle differences in the outline of the body and its muscle tension. There’s a term for this in poker: tells, or slight give-aways in the posture or expression of an opposing player. The heads above tell me that the despair is being acted. So do the hands. And the outline of the bodies.

This photo I’m less certain about:

That might be real despair in a real soldier — I haven’t read the book, so I don’t know what the provenance of the photo is. The way his right foot is pointing slightly inward looks convincing to me. But I’m not certain. The photo might have been posed. If it was, the soldier was a good actor. With a posture like that, there’s little scope to express emotion: with less to do, you have to act more.

And with less information, the mind has to work harder. That’s why I find this an interesting topic. How do we read falsity or veracity in very small things like the angle of a hand or outline of a body? And will computers be able to imitate us? And then surpass us? If so, there must be mines of information buried beneath the surface of old photographs. At the moment, we intuit that information or miss it altogether. One day, computers may be able to trawl archives and come up with new facts about the psychology and relationships of historical figures, simply by reading tiny tells in expressions and postures.

2 thoughts on “Heads and Tells”