The title of this incendiary intervention is once again self-explanatory.

Below is one of the best album-covers I’ve ever seen. It’s a triumph of subtlety and simplicity:

But while the painting and album are good examples of less-is-more, the album is also an example of less-and-more. Part of its power comes from the contrast between the simplicity of the wandering figure and the complexity of the scripts used for the band’s name and album title:

Usually images are more detailed than writing. Here it’s the reverse. And while you can easily read the writing, despite its complexity, you can’t “read” the figure, despite its simplicity. Kittelsen’s skilful simplicity raised questions that can’t be answered. Is the figure male or female? Why is it sorrowful? Where is it going?

Well, you can say where it’s going in one sense: it’s walking from left-to-right. And that made me wonder whether the album could have become even starker in its contrasts. If you’re literate in Norwegian or English, you naturally read images from left-to-right, because that’s the direction of the Roman alphabet. On the album, you read the figure and the writing in the same direction. They contrast starkly in other ways, but they don’t contrast there. So let’s try making them contrast there too. Compare these two versions of the cover:

I think there’s something emptier and more despairing in the mirrored figure, walking from right-to-left. On the original cover, the figure is in some sense walking into the future, despite the weight of sorrow it carries. As we read from left to right along a piece of writing, what’s to the left of our eye is the past, and what’s to the right is the future. The figure carries the same implication. And because the figure moving towards the highly-complex-but-perfectly-intelligible band-name-and-title, there’s almost an implication that its story will be told, even if it’s moving towards death or suicide.

When the image is mirrored, all that disappears. Moving from right-to-left, the figure seems to be walking into the past, not the future. It’s no longer near or moving towards the complexity-and-intelligibility of the band-name-and-title. It’s abandoning the world more strongly: there’s no hope, no future, no implication that its story will be told.

I think the same happens, though less strongly, when the original painting is contrasted with a mirrored version:

The contrast is less stark because, unlike the album-cover, there’s no complex patch of writing in the painting and the figure is moving away from what writing there is: the artist’s signature in the bottom left. In the original, the figure is abandoning identity and intelligibility by moving away from the signature. That’s why I’ve removed the signature in the mirrored version of the painting. It would be anomalous on the right, whether or not it was mirror-reversed, and it would be anomalous if it stayed on the left.

Finally, here’s a photo of two musicians in Sunn O))), the band into which Burning Witch eventually evolved:

In the original, Stephen O’Malley and Greg Anderson are walking from right-to-left. Here’s a mirrored version for comparison: 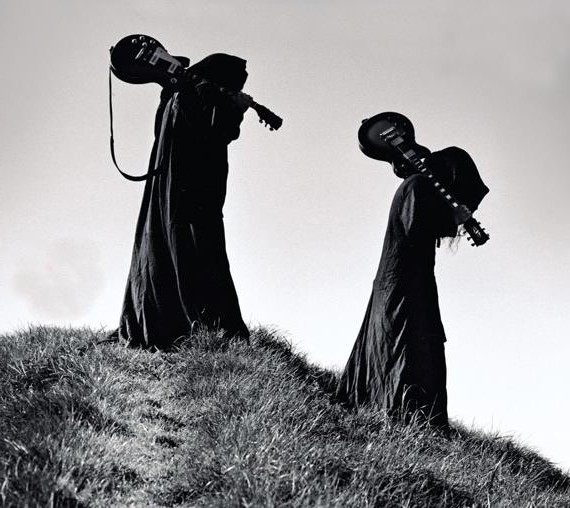 I think the original photo has more power, because the robed figures are walking against the grain, as it were — against the direction in which our Roman-alphabet-conditioned eyes read a photo.

If you ask someone to draw up a list of inventions that have shaped the modern world, it’s likely that a very important one will get overlooked: the microscope. But where would medicine, science and technology be without it? It opened a door in the cellar of the universe just as the telescope opened a door in the attic. We stepped through each door into a new world of beauty and strangeness. The difference is that, so far, only one of these new worlds has proved to be inhabited: the microscopic one. But snowflakes remind you that the microcosmos can interest physicists and mathematicians as well as biologists and doctors. It should interest artists and aestheticians too: this book will delight the eye as well as challenge and enrich the mind. Snowflakes are among the most beautiful of all natural objects, reminiscent now of ice-stars, now of crystalline trees, now of stained glass, now of surreal swords. Their symmetry is part of their appeal, but I think it’s also important that their symmetry is never complete: snowflakes partake both of mathematical perfection and of biological imperfection. They’re individual not just because no two are identical but because no two arms of a single snowflake are identical either. 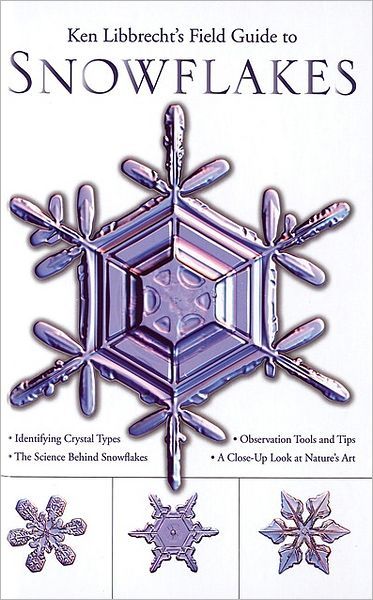 But any two arms can still be very similar, which is an astonishing fact when you consider that they’re laid down blindly by a purely chemico-physical process. How does one arm know what the others are doing? Well, it doesn’t: it’s subject to the same fluctuations of the same environment. As air-currents move a snow-crystal inside a cloud, the temperature and moisture of the air change constantly and so do the crystal’s patterns of growth: “…since no two snowflakes follow exactly the same path, no two are exactly alike.” But snowflakes can be much more unalike than the uninitiated might guess. Some aren’t actually stars, but bullets, needles, columns and “arrowhead twins”. There are also snowflakes with twelve rather than six arms, and snowflakes large enough to have arms on their arms on their arms on their arms. Kenneth Libbrecht, a professor of physics at Caltech, examines all this and more in a book that should appeal to every age, every level of intelligence, and every level of interest in science. You don’t have to read the text that accompanies the beautiful photographs, but if you do you’ll find your appreciation of the photos deepened and enriched.

Either way, spare a thought for the book’s co-author: the humble but hugely powerful microscope. Unlike bacteria and protozoa, snowflakes were known and admired long before the microscope was invented, but they were never known then in their full beauty and wonder. And you don’t have to confine yourself to books like this to experience that for yourself: Libbrecht has a section on “Observing Snowflakes” that demonstrates once again how some of the best things in life are free, or nearly free. For the price of a simple hand-lens you can find new beauty in winter; with a microscope, you can find even more.